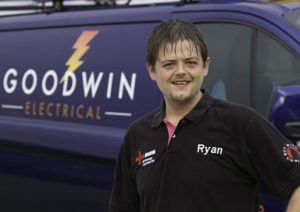 Ryan Goodwin has worked hard at Goodwin Electrical as an Employee working alongside his father Bill Goodwin.

Ryan has  acheived his position as a Qualified Electrician, Solar PV Professional, Ventilation Professional with NICEIC advanced training and City & Guilds 2391 in Inspection and testing.

Ryan has reached this level over 7 years.

Now the time has come for Ryan to move from employee to Joint Owner at Goodwin Electrical.

I (Bill Goodwin)  as Ryans Father and former employer would like to give Ryan a massive congratulation in his acheivement.